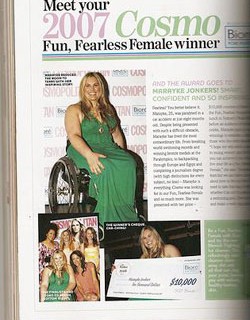 Maroochydore Paralympic Swimmer Marayke Jonkers, 25, will feature in the this months edition of Cosmopolitan magazine, after being named as one of five finalists in the inaugural  Fun Fearless Female Awards.

The nation wide contest aimed to find smart, confident young women who are courageously pursuing their personal dreams and inspiring others along the way, and Jonkers is thrilled by the announcement.

“I am really excited to be in the final five as there are four other amazing women who are truly inspirational and are sure to go a long way in life,” she said.

The overall winner will feature in the November magazine, and win $10 000 grant to help turn their dream to reality. The winner will be determined by public votes on the competition website www.ninemsn.com.au/fearless.

“Now I am calling on everyone to get behind me and vote, ” she said.

Jonkers became a Paraplegic in a car accident as a baby, but did not let that stop her from realising her dream to swim for Australia.

A 12 year veteran of the Australian swimming team she has broken 70 Australian records, the world record for 100m butterfly and also represented Australia at the Sydney 2000 Paralympic Games. She is now in training for Beijing 2008.

In a bid to win gold at the Games, she has switched to a new coach and training regime focussed on one event- the 50m breaststroke.

“A month ago, I was told my main event the 150m Individual Medley has been cut from the program in Beijing, as well as the women’s relay events I hoped to compete in. So I am now focussing all my energy on the one event I have left, and hopefully this will be a blessing in disguise because I can prepare so much better for that one swim,” she said.

Besides her life as an elite athlete, Jonkers has undertaken university studies in Communications and Social Science. She hopes to use these skills to give something back to the community.

The Cosmo Fun, Fearless Female reader’s vote will start on Monday July 2, and close on August 5, 2007. Everyone who votes has a chance to win a biore cosmetics gift pack.

To cast your vote for Marayke visit www.ninemsn.com.au/fearless

I won the first ever Cosmo fun fearless female Award!