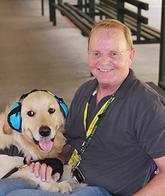 Bradley, from Wynum in  QLD,  is an SH2 classified shooter specialising in 10m standing and 10m prone air rifle events. He represented Australia in shooting  at the 2012 London Paralympic Games. Bradley  has incomplete quadriplegia as a result of contracting bacterial meningitis when he was 35. He took up shooting  as a substitute for physiotherapy.

When he’s not on the shooting range, Brad spends much of his time with his eight-year-old golden retriever, Ace. An accredited dog through Assistant Dogs Australia, Ace is a huge help to Brad giving him  more independence, helping him move from place to place, and attending many events that Brad competes in. He even assists  Brad to perform daily tasks such as putting on his shooting jacket.

​An active man with a passion for social inclusiveness, Brad is heavily involved in Assistant Dogs Australia and performs regular presentations with Ace on behalf of the organisation. He was a founder and CEO for Mobility Assistant Dogs in New Zealand and remains heavily involved in the Puppies in Prison program. Down the track, he is interested in ambassadorship and international relations.