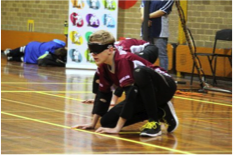 Connor, 17, represented QLD in the junior team for Goalball, winning the National competition and was named best junior offensive player. Connor was also named as part of the junior dream team for the event.

Connor is heavily involved in Goallball and has been selected to play for the youth Queensland team and is also involved in tandem cycling, riding with a sighted/visually impaired riders and represents Guide Dogs Queensland in a number of events.

Last year Connor represented Queensland in the junior team for Goallball with his team winning the National competition playing undefeated at the event.

His advice to other athletes and motto is to keep on trying.