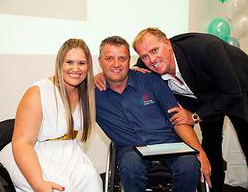 Darron, 45, made a triumphant return to triathlon in 2010, eight years after he was paralysed in a bike accident while training for a triathlon. Last year, Darron achieved his goal of completing an Olympic distance triathlon within 10 years of his accident. He has competed at two Paratriathlon World Championships and this year completed his first half Ironman.

Watch Darron Compete in the Mooloolaba Half Ironman