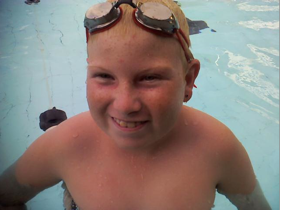 David, 14, established 8 state records and won 5 bronze and 2 silver medals at the 2011 McDonalds Multi-class competition in Brisbane. David trained and competed in able-bodied events for the first two years until he was classified. David has nominated for 10 events at the McDonald’s Multi- class event in 2013.

David began swimming through a learn to Swim Program in Cotters Aquatics Swim and Fitness and his coach invited him to join the Squad progressing to compete in the 2011 McDonalds Mulit Class Championships in Brisbane, where David won 5 Bronze medals and 2 Silver and established 8 State records.

When David was asked to join the Goldfish Squad team, during the first two years he trained and swam in the able bodied events until he was classified.

Now there are 4 groups in the squad with David being capable to swim in the State Sharks, 2nd top group and  trains up to 5 sessions a week.

David was born with Spinal Bifida competing in basketball, cross country and athletics as well as swimming.

At David’s local carnivals he swims against Paralympian Grant Patterson (Scooter), and David beat him in the 50m Freestyle so David’s goal is to beat him again.

His motto is to do his best and his advice to other people is to try your best and give it a go.

David has nominated for 10 events at the McDonald’s Queensland Multi Class Championships in 2013.