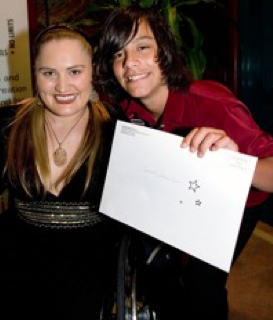 Jarrod is a young football( soccer) player with a never say die attitude who is determined to represent Australia.

Competing in a sport called 7-a side CP football, which is for athletes with cerebral Palsy, Jarrod is not one to be modest about his potential. He states his goal is to be the best player in Australia for his classification (c8), and is training hard to make his goal come true.

Cp football follows the rules of the International Federation of Associated Football (FIFA), with some modifications.
There are seven players on the field rather than 11, the measurements of the playing field are smaller, there is no offside rule and throw-ins may be made with only one hand. This sport is intended for athletes with cerebral palsy and a ratio of players from varying levels of disability must be maintained. The match consists of two halves of 30 minutes.

Jarrod was awarded an introductory grant by sporting Dreams. The grant funds will no doubt come in handy, as Jarrod has had to make the tough decision to stop playing mainstream (able-bodied) football on weekends in order to work and earn money to fund his own travel costs.

The 15-year-old grade 10 student has amazing family support, as his father Jay Larkins is the coach of the Queensland 7-a-side football team. He says Jarrod has a lot of potential.

“Jarrod has always been a pleasure to coach. His never say die attitude and will to become the best in his sport are great to watch. He trains well and as he matures is improving with his self motivation, especially for his age. He has displayed ability way above his age and does not allow his disability to hold him back.I feel it is not a matter of if he represents his country but when.”