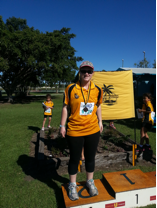 Kyra, 15, has a vision impairment but competes in triple jump, high jump and hurdles against able bodied athletes, and has broken Bowen Athletics Club records.  She took up athletics five years ago at school competing against the able-bodied students. Kyra is new to sport for athletes with a disability, being classified for the first time in 2012.

Kyra, as an athlete with a vision impairment, began swimming but when she was ten her sports teacher signed her up for shot put against able-bodied athletes. When moving to Bowen, she was told of the challenge games for people with disabilities and was excited to know that people with disabilities could compete as an AWD, so she went to Townsville and competed in the invitational events where she began her sporting life as an AWD.

Kyra was classified in 2012 and has improved quiet quickly, breaking club records as an able bodied athlete, since joining the club (Bowen Athletics club), and attempts triple jump, high jump and hurdles.

Kyra’s sporting goals for the future are to go to the Paralympics in Rio or to be selected for the next Paralympic team, but mostly she wants to try her best and be all she can be in sport.

Her favourite quote comes from the movie A Knights Tale, when the father of the main character says to his son that he could change his stars, that he could be whoever he wanted to be, but he needed to make it happen and that’s what Kyra plans on doing.

Kyra’s advice to other AWD’s would be don’t give up. Do not listen to everyone else. Do and be who or what you want to be. If you wanted to be the fastest runner in the world, then you go for it. Don’t let your disability hold you back because you will not get anywhere if you do.