Sport: Goalball Age: 31 Disability: Visual Impairment Motto: Focus on what you can do and not what you can't do. Greatest Sporting Achievement: Member of winning New Zealand South Island under 15 Rugby team. 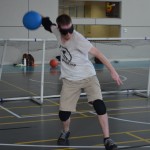 Mathew, 31, began playing goalball in the local competition in Cairns. He competed at the 2014 Goalball State Championships and has achieved selection in his first state team for the national goalball titles in October.  The father of two and voluntary youth worker aspires to compete at an international level.

Mathew’s greatest sporting achievement came prior to his vision impairment,  when he was a member of the winning New Zealand South Island under 15 rugby team. His advice is to “focus on what you can do and not what you can’t do.”