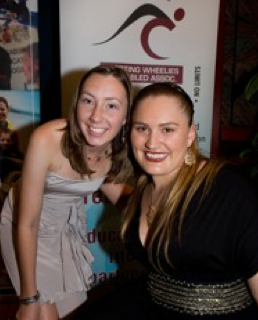 Morgan is a dynamic and inspirational young sprinter whose personal motto is when we hold back on life, it holds back on us.

But there was a time when she did hold back. Morgan, who was born with cerebral palsy, was too embarrassed to participate in school sport, so she didn’t try running until 2004.

One year after taking up the sport Morgan represented Australia at the Pacific School Games, winning gold medals and broke 3 national age records. She has competed at counless state, national and inter school championships winning a swag of medals and breaking numerous national age and open records.

She has even been ranked number 1 in the world over 1500m.

Morgan just missed out on the chance to compete in Beijing, having been selected in the shadow squad, a shortlisted group of athltes from which the Australian team was eventually chosen. This is a great honor in itself, and something Morgan should be very proud of.

Her assistant coach Leanne Smith praises Morgan for her attitude and commitment.

“Morgan rises to the challenge of each training session without compromise and completes training still smiling. If ever there was a pin up athlete needed to promote sport to students with difficulties and to hold high moral ethics, here is a perfect candidate.Morgan-achieving results with hard work and belief in yourself.”

When she is not running, Morgan enjoys playing with her dog Floyd, horse riding, swimming, spending time with her friends, cross country running, listening to cd’s, trying new experiences and going on holidays with her family.

Her ultimate aim is to compete at the Paralympics.