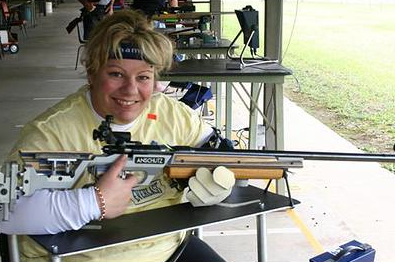 Natalie Smith is an Australian Paralympic shooter  who won Australia’s first medal at the London 2012 Paralympic Games when she took bronze in the Womens’ SH1 10m Standing Air Rifle event . She also competed in the 10 m Air rifle prone. Originally from Fitzgibbon Qld, Natalie now lives in Victoria where she has a scholarship with the Victorian Institute of Sport.

​In 2011 Natalie was a Sporting Dreams Introductory grant recipient when she was just starting out in shooting . Natalie  became a paraplegic  in 2009 as a result of a spinal cord injury when she slipped off a rock whilst on a popular tourist walk in the Northern Territory.

She was introduced to the sport by Sporting Wheelies when she lived in Brisbane to participate in their Walk On program as part of her rehabilitation.

Natalie’s talent was instantly recognised by Paralympic shooting coach Miro Sipek and after only a few domestic competitions and very impressive performances  Natalie joined the high performance squad in May 2011.”

On the domestic shooting scene, she won silver medals in the prone and standing divisions at  Australia Cup 1,2 and 3.

Natalie has always loved to compete, and prior to her accident was a competitive equestrian athlete. Since the age of 10 she competed in all three Olympic disciplines-dressage, show jumping and eventing- winning zone and State champion in addition to many other victories at junior and senior level competitions. She also enjoys handcycling.

Natalie lives by the motto “If it’s worth doing it’s going to take hard work.”