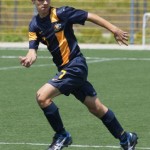 Robert, 18, is from Karana Downs and has been playing for the Queensland Paralympic football team since 2009. He was recently named in the state team for the 2014 National Paralympic 7-a-side Football Championships.

His goal is to play again for the national team, the Pararoos, having last represented Australia in 2012 – his greatest sporting achievement. Robert, who has cerebral palsy, plays for the mainstream Westminster Adult Men’s Team and trains with the Brisbane Paralympic Football Program, where he mentors younger players. He has also competed in athletics and swimming.