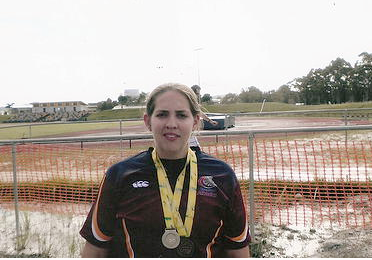 Sara holds the number 1 world ranking in discuss for her classification this year. The sunshine  coast  local from Beerwah is also the Oceania record holder and  now hopes to compete at the 2012 or 2016 Paralympic games.  Sara acquired a disability through a fall at school. She fractured her hip but this wasn’t detected until 6 months later.Despite surgery to rebuild her hip she has been left with a shortened right leg. Due to genetic condition she also has a spinal fusion from below her ribs to her tailbone.

Sara says she became involved in  sports through school when she was in year 10. This year she competed at the Arafura Games  in discus, shot put and javelin. She also competed at the National and State Championships.  She trains at the University of the Sunshine Coast Sports Centre. Sara is currently recovering from knee surgery and hopes to return to competition in 2012. Her favourite quotes is “never give up on your dreams.”