We are officially now known as Sporting Dreams Queensland Inc- an Incorporated Association in our own right.

What does that mean for athletes? Nothing will change grants will go out annually, there will be an awards ceremony  and Marayke will remain a key contact. From An administrative point of view it means we can now apply to receive tax deductible donations, apply for grants, insurance and run events as a legal entity rather than under the auspices of Sporting Wheelies and Disabled Association. We value the working relationship with Sporting Wheelies since we began in 2008 and wouldn’t be where we are without their assistance but with their organisation restructuring and Sporting Dreams looking to expand this has been a win all around. The final funds held by Sporting Wheelies will be distributed at the 2016 Awards Ceremony and the two associations will continue to work together to empower Queensland Athletes. 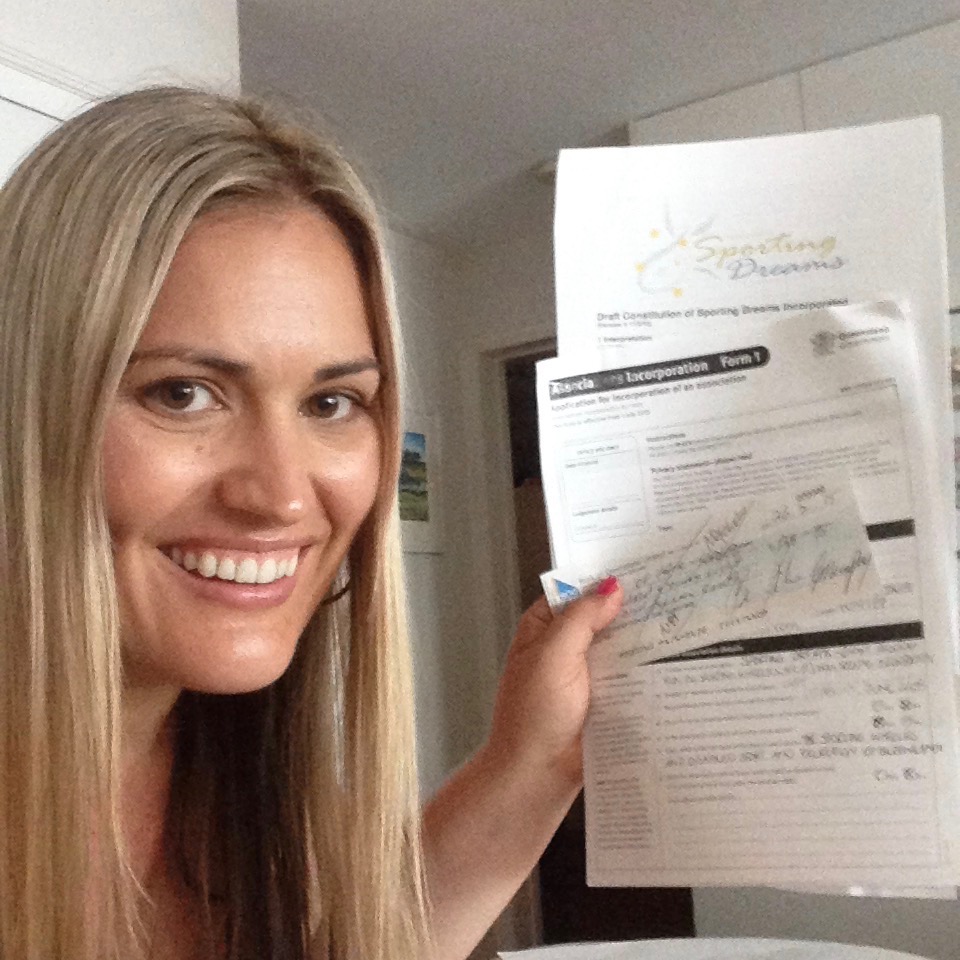 It has been quite a journey for Marayke as the steering committee leader responsible for getting the paperwork through the department of fair trading.two separate hospitalisations and major surgeries. 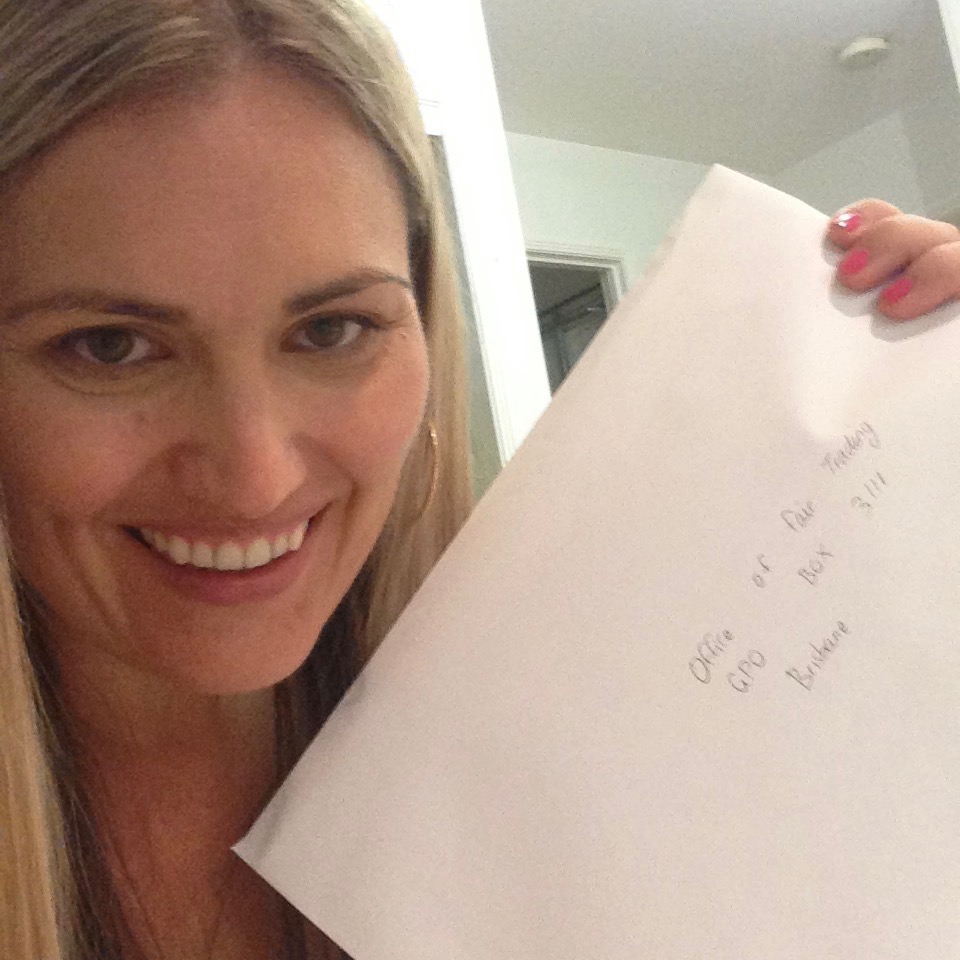 She sent off the original paperwork and cheque  excitedly after an AGM at the RSL where a draft constitution was unanimously accepted and attendees voted unanimously to become incorporated. A  provisional Committee was named for once incorporation occurred. 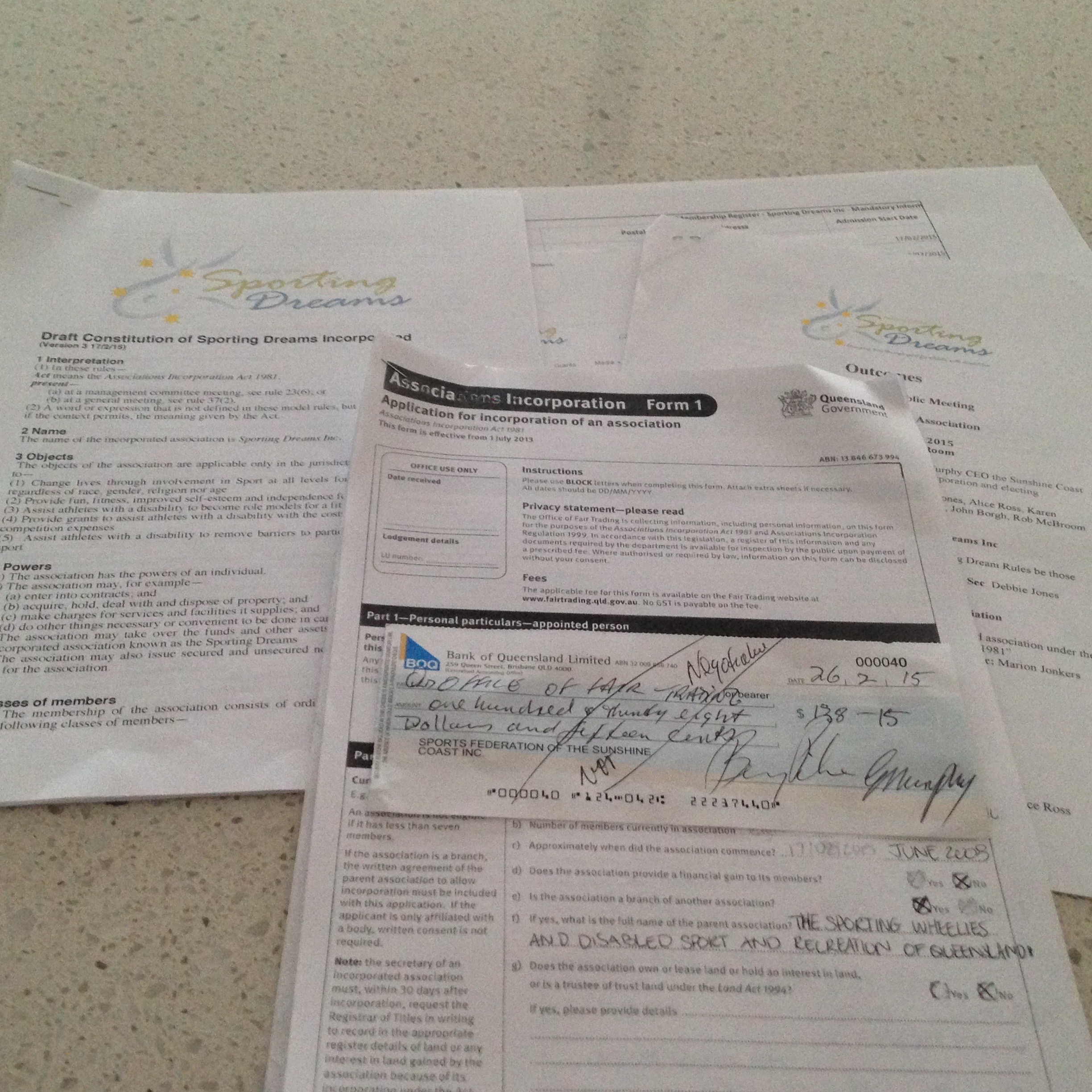 An amusing year of phone calls ensued as the department of fair trading became concerned the public May confuse Sporting Dreams with Sporting dreams Inc. ( ourselves). Many voice dictated letters from the hospital later ( they only deal in snail mail and marayke is unable to type) the issue was resolved and marayke happily posted off the next paperwork from the PA hospital where she was a patient being treated for osteomyelitis and infected scoliosis rods. 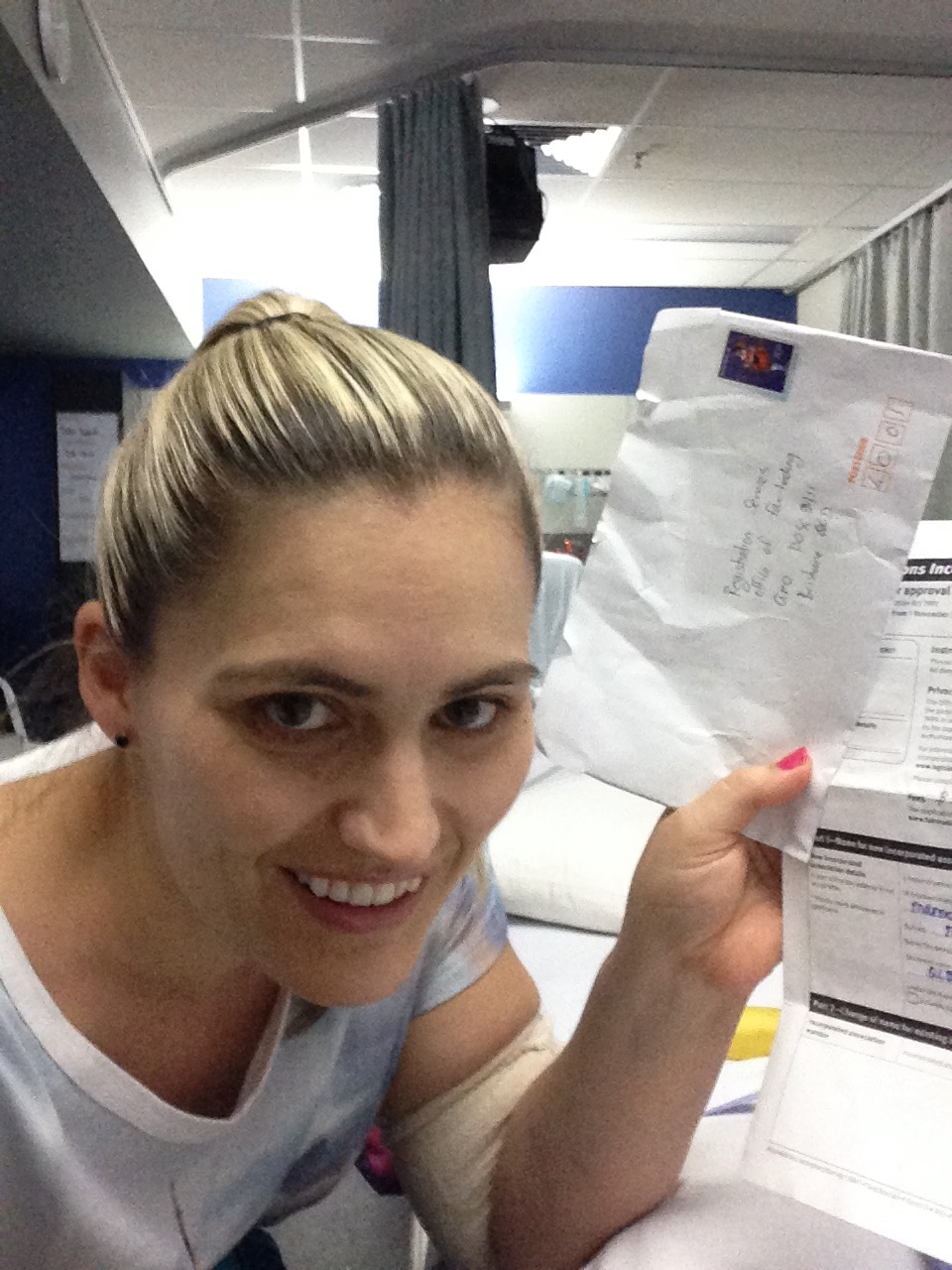 She set a new personal best ( not something she expected to do bed bound with  a picc line in her arm) after a record 7 hour 48 minute and 37 second phone call regarding the “unsuitable name” debacle- but in the end found out which forms and processes where needed. It came together with a never give up attitude and a letter from Sporting wheelies to explain why it would be no concern for sporting dreams to continue as Sporting Dreams QLD Inc. 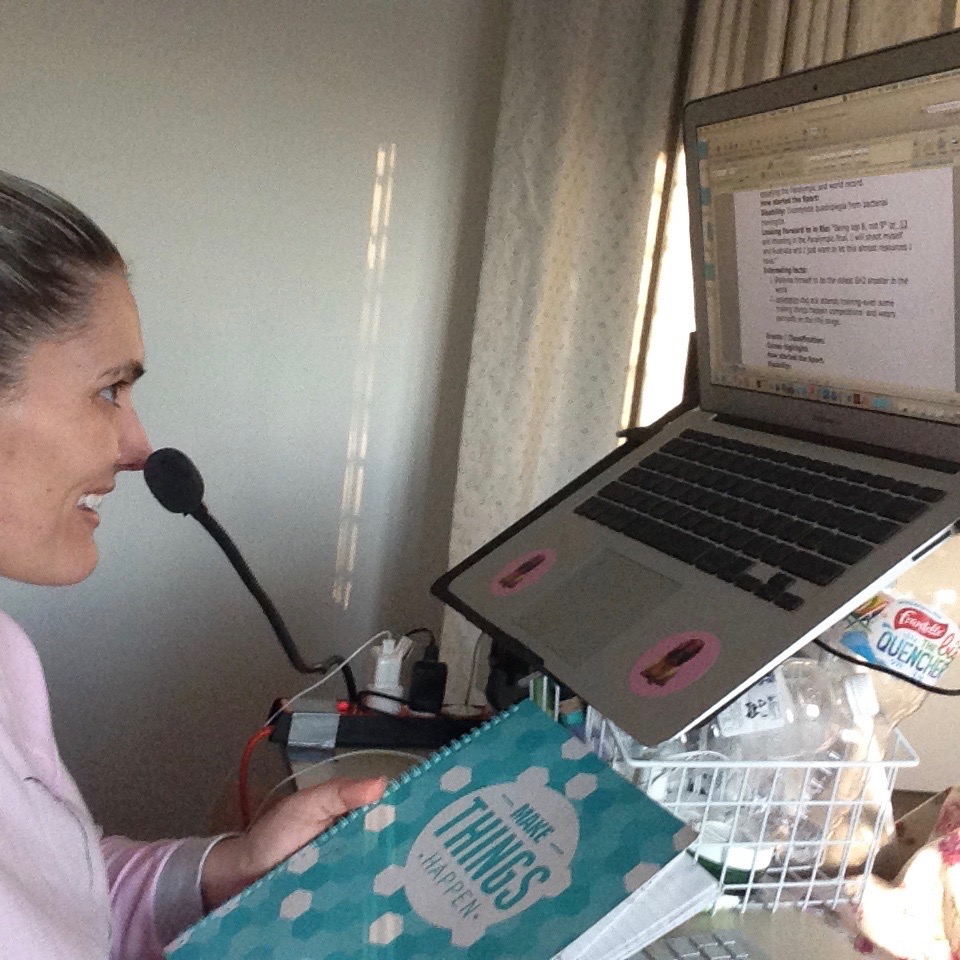 Sixth months later, after being transferred to Greenslopes hospital and undergoing two further surgeries with her mobile hospital ‘office ‘ she got the best welcome home from hospital gift ever- the certificate of incorporation!!!!

The sporting Dreams board is now working towards gaining DGR status ( the ability to receive tax deductible donations in plain english). 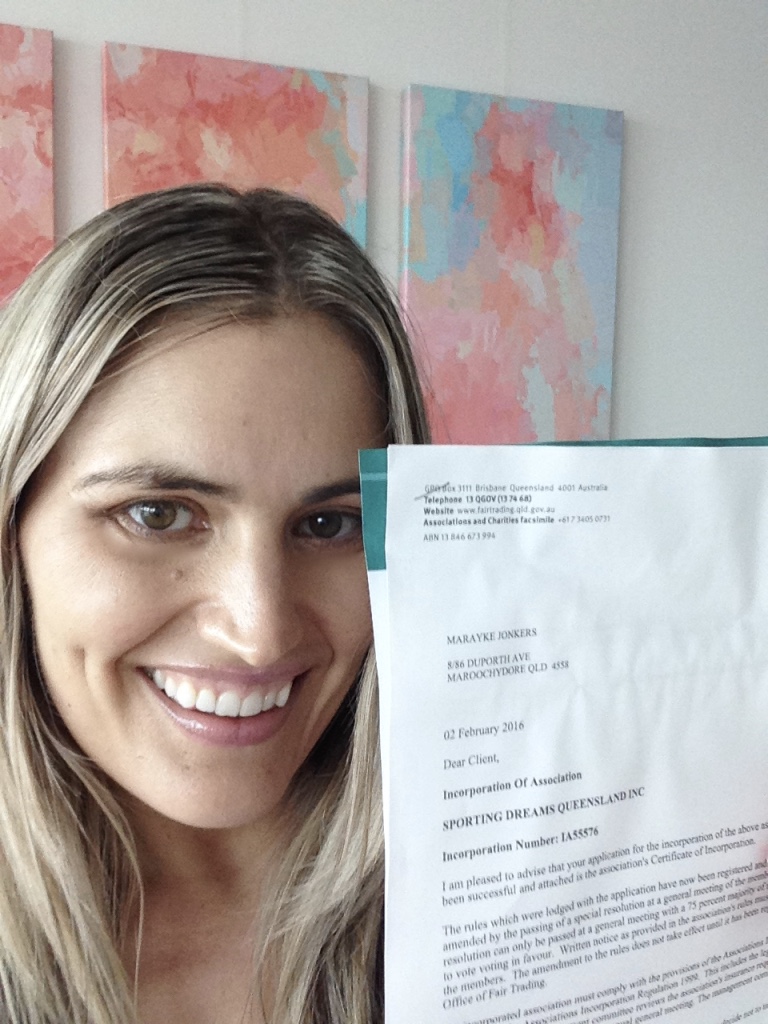 Heres to  a bright new future with our first board !