Sport: Goalball Age: 28 Disability: Vision Impairment Motto: Never Give Up! To Live is to Fight. Greatest Sporting Achievement: Fifth in the World Chess Championships for women with a visual impairment. 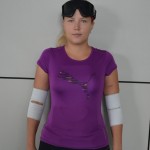 Olga, 28, learned about goalball in Ukraine and came to Australia just as a social goalball competition was starting up in Cairns.

Olga competed at her first Goalball State Championships in 2014 and has achieved her goal of being selected in the state women’s team for the national titles in October. Her aim is to play goalball at an international level.

Prior to taking up goalball, Olga played chess and placed fifth in the World Chess Championships for women with vision impairment.

Her motto is ‘Never give up!”