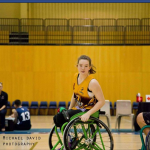 Georgia’s goal is to progress through the representative ranks and ultimately play for the national women’s team, the Gliders. Georgia, who has Arthrogryposis and bilateral club feet, is also an accomplished swimmer and has broken many age records and attended national titles.