Sport: Wheelchair Basketball/Wheelchair Rugby Age: 19 Disability: Loss of part of 4 limbs to Meningococcal Septicaemia Motto: It's all fun and games until someone loses an eye, then it's just fun you can't see. Greatest Sporting Achievement: Member of the Gold Medal winning Queensland Junior wheelchair basketball team at the 2014 Kevin Coombes Cup. 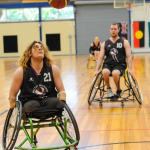 Josh, 19, was a member of the gold medal-winning Queensland junior wheelchair basketball team, the Rolling Thunder, at the 2014 Kevin Coombes Cup and rates it as his greatest sporting achievement. Josh, from Slade Point (Mackay) was named in the All Star 5 at the 2014 Wheelchair Basketball State Championships (The Classics), where he competed as a member of the Mackay Machines. Josh, who lost part of all four limbs to meningococcal septicaemia, also plays wheelchair rugby and competed at the 2014 state championships (The Bash). His ultimate goal is to represent his country in either sport. Josh is also a regular handcyclist in Mackay’s River2Reef Charity Ride and a talented artist.