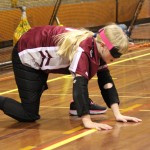 Katja, 13, attended a goalball ‘come and try’ day in 2012, and she has been playing ever since. Katja’s goal is to be selected for the Australian Girls Youth team and go on to play for the Aussie Belles national team at the Paralympics.

Her sporting achievements to date include winning the Best Defensive Junior Player trophy at the 2012 Goalball Nationals, and competing in the 2013 Australian Invitational Cup in Sydney, where her team won the tournament.

The Kenmore local is preparing for the 2014 national titles in October.  She is also part of the Queensland School Swimming Squad.