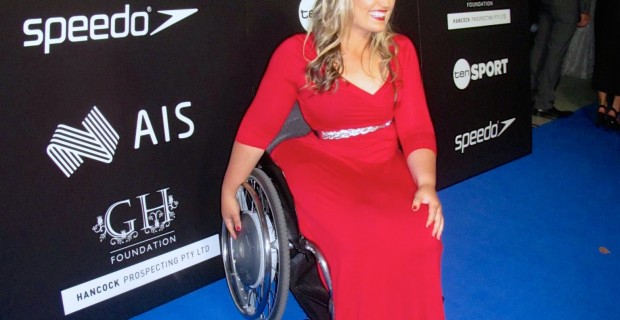 Marayke is a presenter at swimmer of the year awards 2014

What an honour to be invited to attend the 2014 swimmer of the year awards as a guest presenter.On Monday December 22nd members of the Australian Swim Team swapped their swimming caps for evening wear for the 2014 Swimmer of the Year Awards ceremony in Brisbane.The ceremony, held at Brisbane City Hall, recognises the outstanding performances or achievements of swimmers, coaches, volunteers and clubs from the 2014 swimming season.

I couldn’t have been happier to present the Paralympic Program Swimmer of the Year award to my former teammate Grant Patterson @grant scooter patterson. 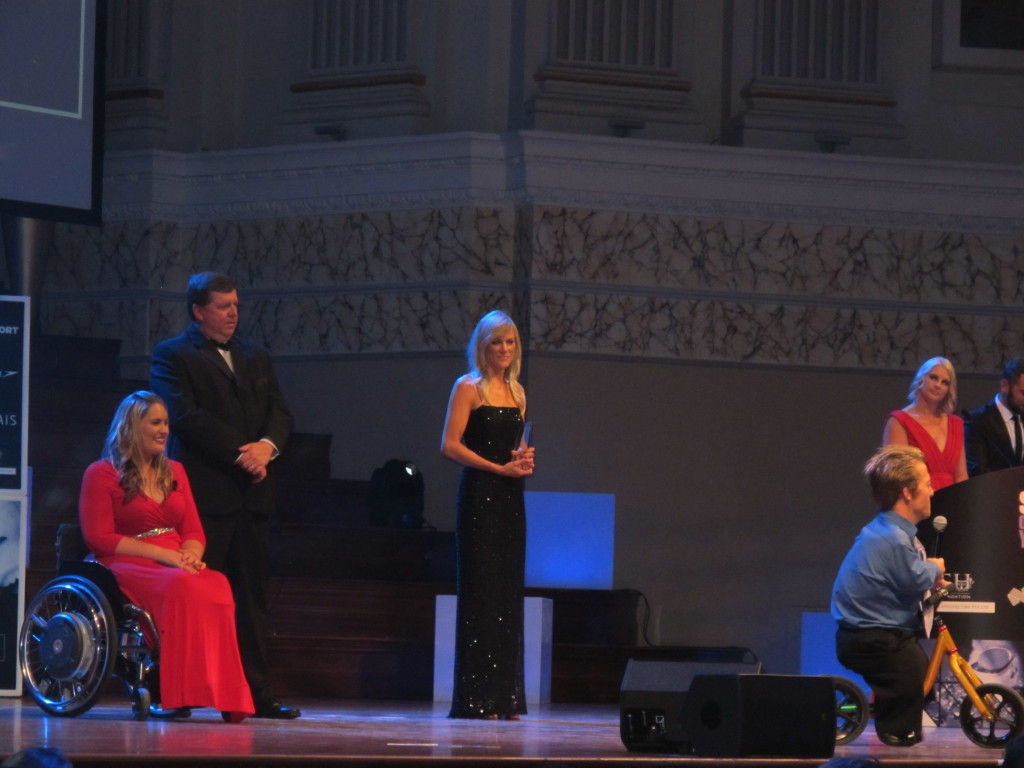 Patterson picked up an impressive six medal haul at the 2014 Para Pan Pacs in Pasadena, California and set a number of new personal bests in the process.

Scooter entered the swimming scene towards the end of my career and was the only other athlete in the country who competed in my event 150m individual medley. so we had the very unusual situation of being a male and female in the pool racing each other at major events such as national championships- I was determined never to be beaten by a boy and it didn’t happen- but his personal best time is now faster than mine and he has gone on to become a Paralympian and part of the Australian Paralympic Team. So proud of you Champ!!!! Carrying on the flag for our event alongside Ahmed- good to see the future in in good hands,

Congratulations also to the other nominees my former teammates Sean Russo and Brendan Hall.

Also many congratulations to all the award recipients especially my former Paralympic teammates who received the services plus swimming awards upon their retirement Paralympians Pru Watt and Katrina Porter, and Olympians Stephanie Rice and Jessica Schipper- it was an honour to share the pool with you over the decades and cheer you on!!!#ourteam #soty2014 Australian Swim Team Australian Paralympic Team
Patterson picked up an impressive six medal haul at the 2014 Para Pan Pacs in Pasadena, California and set a number of new personal bests in the process.

There are 16 awards on offer on the night including Golden Moment, Swimmer’s Swimmer, People’s Choice, Olympic, Paralympic and Open Water Coach of the Year and the highly sought after Swimmer of the Year award. 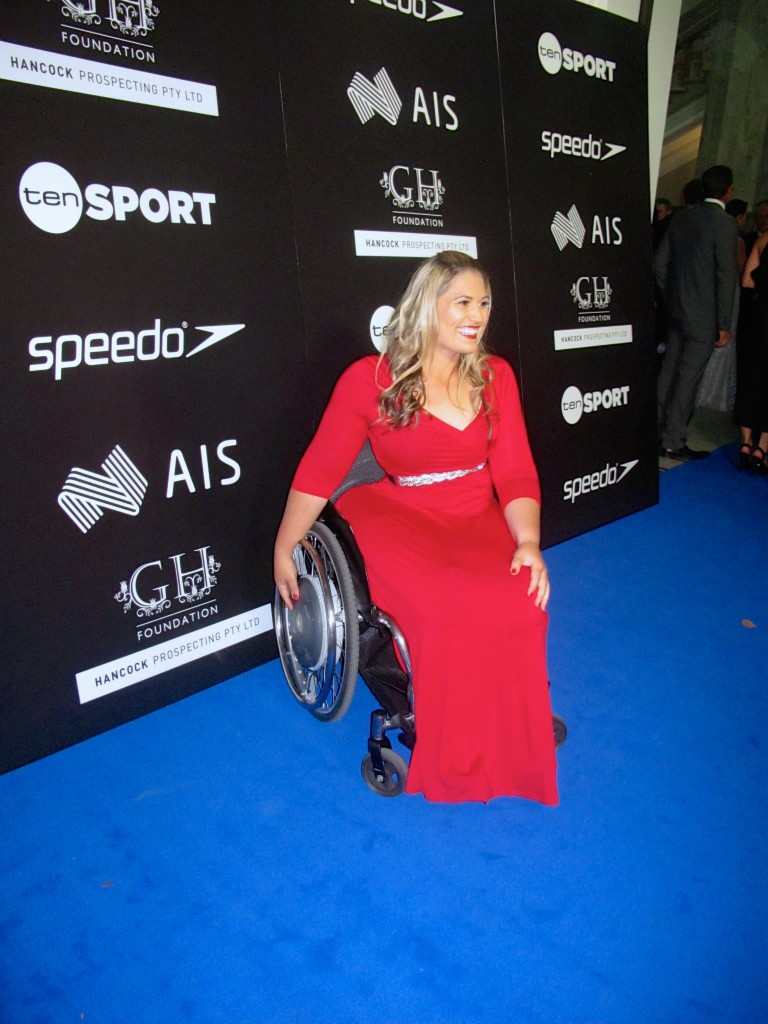 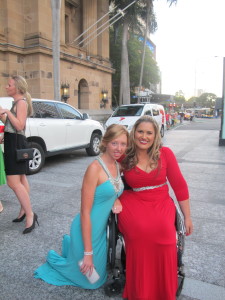 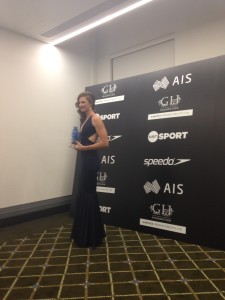 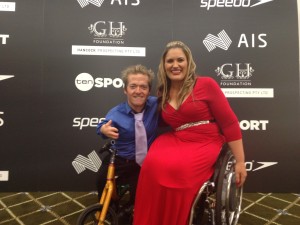 Marayke and scooter in the media room after presenting the award 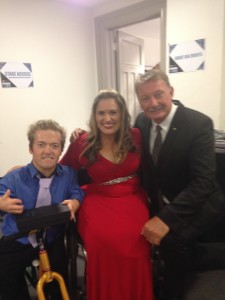 backstage with the legendary John Bertrand president of serving as to area and champion America’s Cup yachtsman. 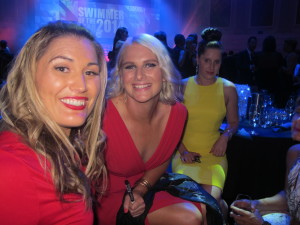 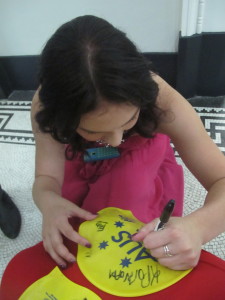 Paralympic superstar Maddie Elliott who captured Australia’s heart this year when she won gold at the Commonwealth Games at the tender age of 14. 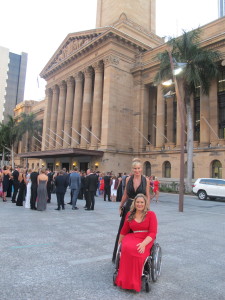 Marayke with training partner and guest for the event Debbie Jones 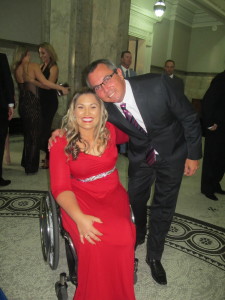 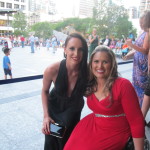 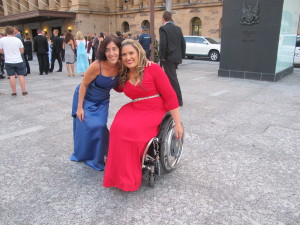 Marayke with guest and childhood best friend Leanne- the girls met when they were six years old and went on to swim together for Australia at the 1999 FESPIC games in Thailand. 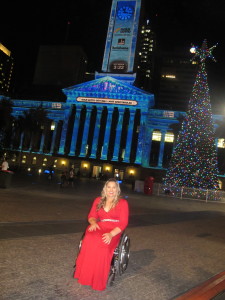