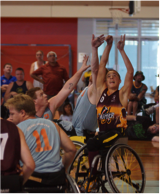 Jordan, 19, has just returned from representing Australia on the U23 team at the World Championships in Turkey where his team won Bronze in September 2013. He has also travelled to Dubai and Thailand with his sport.

Jordan has been playing wheelchair basketball for the past 7 years and has travelled with his sport, coming 2nd place at the Sunshine Coast Invitational in Mooloolaba, 2nd Place at the Asia/Oceania U23 Qualification Tournament in Thailand 2013 and 1st place at the Fazza International in Dubai 2012.

Jordan become involved in Wheelchair Basketball in 2005 at a come and try day at Nudgee College and has been progressing ever since.

Jordan’s disability does not limit his dreams as he hopes to qualify to represent Australia as a member of the Rollers Open Men’s squad.

His greatest sporting achievement was being selected to represent Australia on the U23 team at the World Championships in Turkey where his team won Bronze in September 2013.

Jordan is receiving a development award from Sporting Dreams to help him compete in up and coming events such as the Slam Down Under in New South Wales this year.

“I’ve missed more than 9000 shots in my career. I’ve lost almost 300 games. Twenty-six times I’ve been trusted to take the game winning shopt and missed. I’ve failed over and over and over again in my life. And that’s why I succeed.”

Jodan’s advice to other althletes would be that sport is one of the greatest priveledges in life. We form friendships that last as long as the memories of achievement. It has opened doors I never thought existed so never give up, never say never and always strive to be your best.