Darron does his first half Ironman 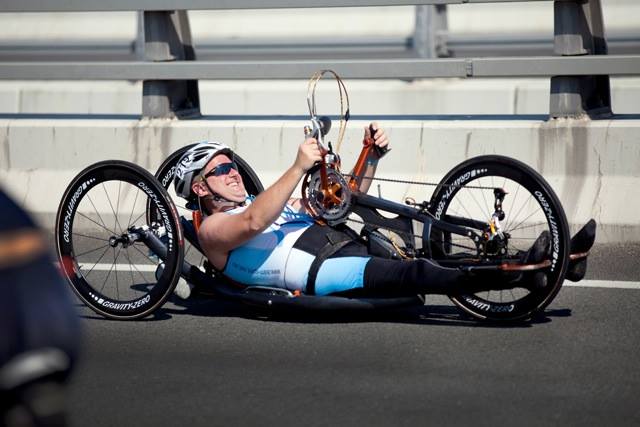 You know those moments that will stay with you for a lifetime? I had a most unexpected one today watching my friend and training partner Darron finish his first half Ironman.

It is an achievement in itself to swim cycle and run for seven hours. But when you consider that Darron used to be a triathlete before becoming a paraplegic in an accident 10 years ago, but this was the first time and he was finally achieving his dream to do a half Ironman it takes on a whole new meaning. He was finally back doing his old sport- going further than ever- but using only his arms!

In fact Darron was about make history becoming the first paratriathlete ever to complete the Mooloolaba 70.3.

Our journey into triathlon together began many years earlier one day at uni when Darron came up and introduced himself and told me he used to do triathlon before his accident. I asked him if he was still training, he looked at me like I was crazy! I just asked why not. The answer turned out to be he wasn’t sure about swimming without using his legs-I don’t think me mentioning I could do three or 4 km in a session helped very much! But that day I was convinced he needed to do triathlon again, so much so that when he gave me his phone number I saved in my phone as Darron –triathlete. Although it would be many more years before that was an accurate title.

Slowly over time Darron introduced me to handcycling. Eventually one day he decided to come and watch me do a triathlon, then watch me at swimming training and before we knew we were training together. Finally we both qualified for the world Championships in Budapest haungary and shared the experience and finishing our first international race.

I had to retire from sport after that with an injury, but I always knew Darron wanted to do the longer distance events.

So as a race day dawned for the half Ironman I set off with my course maps, water bottle, hat, and my hand made “Go Darron sign”.

Somehow thanks to the wonders of Facebook I discovered my mum’s friend Neil was riding a motorbike with an official mechanic on the back during the cycling leg. This was most fortunate situation because it meant Neil could send me SMS updates when Darron was approaching my vantage point. I also lined up Neil to scream out “go Darron” whenever he came past.

I quickly discovered there is quite a knack to being a triathlon supporter. You have about three seconds as they come flying past to wave a sign, scream go go go, oh a capture the moment with a stills and video camera. So I set up camp on the Maroochy motorway bridge balancing both cameras on the guard rail, and poking my sign through on a downwards angle so Darron could see it on the handcycle where he is basically lying flat.

After four laps you have to quickly decamp from the cycle and make it to the side of the run course in time to cheer there.

I had exactly one problem. With my current arm injuries, I knew there was no way I could walk from Maroochydore to Mooloolaba (about 10km) and most of the roads were closed so you can’t drive.

The universe weaved some of its magic to make it happen for us. Darron had asked me to stand on top of Alex Hill, so I knew somehow I had to get there.

Neil (the guy out on the racecourse with a mechanic) phoned his mate Michelle and asked her to push me. I’ve never met Michelle in my life, so I thought it was crazy anyone would want to push someone in a wheelchair up and down Alex Hill. But it turned out she’d been watching me swim for years and had been too shy to say hello. She thanked me for letting her meet me, and I mutually thanked her for her offer of getting me up the hill!

My mum kindly drove me as far as we could get through the roadblocks. Then

I met the lovely Michelle and Alex and we hiked up the hill ready to cheer him on.

We waited………… And waited…….. And waited…….. The butterflies in my belly were doing it canter now so sure something must gone wrong. Or maybe it took us so long to drive and walk there that we missed it?

But finally saw him in his bright yellow chair inching his way up that hill. It’s a bugger of a hill. I’ve tried it myself many times in my day wheelchair and handcycle as part of my swimming training. But it’s a whole different ballgame in a racing wheelchair. With all your weight at the back, the front wheel keeps wanting to lift off the ground when it steep. So you have your head down between your knees trying to keep a low centre of gravity and struggled to push at the same time.

Every fibre of my being wanted to run out there and push or drag him up that hill, but of course I couldn’t so I set out shouting and screaming it out as I could. Later Darron told me he liked the bit when he was going fast on his bike, and down the hills. But from me this moment on the hill was what defined a great athlete. The bit where it gets really hard and you tough it out. Not just once but four times the competitors had to tough it out up that hill. On the fourth time I couldn’t even be there to cheer him on, I knew I had to scurry on ahead and find my way to the finishing line to see the end of the race.

Upon arriving in finishing chute I discovered much to my horror that it was lined with a blue fence above my head one sitting in a wheelchair- I wasn’t going to see the finished all!! Thinking very quickly I snuck through a few barricades to end up in a garden on the other side of the fence.

There I found out I make a much better competitor than spectator- whenever I had a swimming race I had nerves of steel. But this time I had a belly full of butterflies and my eyes were very watery (I tried to pretend I wasn’t crying ).

In fact I have only ever cried in public once in my life- the day I announced my retirement from swimming. That was until today when I saw the vision of him flying down Alex Hill into the finishing chute and a knew he would make it.

There may have been a few tears. And then there were lots of cheers.

I started sporting dreams hoping to help change other athletes lives through sport.

I never thought the life that would change was my own. But watching that one moment when he crossed the finish line and being there to say congratulations moved me in such a profound way it will stay with me forever.

That’s the power of giving through sport. You never know, the life you help change might just be your own.

Darron, 45, is an inaugural Sporting Dreams grant recipients. Hemade a triumphant return to triathlon in 2010, eight years after he was paralysed in a bike accident while training for a triathlon. Darron achieved his goal of completing an Olympic distance triathlon within 10 years of his accident. He has competed at two Paratriathlon World Championships and this year completed his first half Ironman.