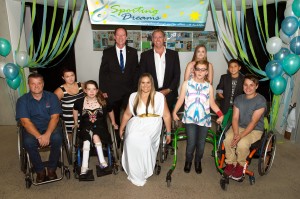 Paralympic swimmer and founder of Sporting Dreams Marayke Jonkers  awarded  a record number of 30 Sporting Dreams grants to athletes with disabilities on November 1st at the University of the Sunshine Coast. The 30 athletes receiving grants this year compete in sports as varied as swimming, athletics, wheelchair basketball, shooting, equestrian and lawn bowls and amongst them are two Sunshine Coast  athletes Darron Shields (paratriathlon) and Amy Deguara  ( Para canoe). Jonkers says both Darron and Amy are very talented athletes, who have demonstrated a commitment to training and have achieved remarkable success in their sporting careers so far. “This grant will allow them to focus on training and competing as they work towards their goal of competing at the Rio 2016 Paralympic Games,” she said. Darron, 45, made a triumphant return to triathlon in 2010, eight years after he was paralysed in a bike accident while training for a triathlon. This year he completed his first half Ironman, becoming the first paratriathlete to finish the Mooloolaba 70.3 event. Last year, Darron achieved his goal of completing an Olympic distance triathlon within 10 years of his accident. Darron was inspired to take up triathlon again after watching Marayke compete at the Recliffe State triathlon Championships and they became training partners. He has competed at two Paratriathlon World Championships. Amy, 25, is starting para canoe (kayaking) after playing wheelchair basketball since the age of eight. She received a sporting Dreams grant for wheelchair basketball in 2010. Amy first tried para canoe two years ago, but has had to overcome a number of injuries before she could begin training in her new sport. The ceremony was be attended by dignitaries including  the Honorable Steve Dixon,MP,  Minister   for National Parks, recreation, sports and racing; Councillor Jason O’Pray,for and representatives from sporting bodies including  sporting wheelies and disabled association  and  swimming Australia.

Jonkers, who represented Australia at 3 Paralympic Games, founded Sporting Dreams in 2008, after winning $10,00 in the Cosmopolitan Magazine Fun, Fearless female awards (2007). Sporting Dreams aims to help athletes with disabilities to achieve fun, fitness and personal development through sport and to support future Paralympic champions. Jonkers has always wanted to give something back to sport, and to ensure up and coming athletes have the same opportunities she has had.

“Athletes with disabilities train just as hard as other athletes, and experience the same thrill of winning, yet they face additional expenses. A push bike costs $100, whereas a handcycle costs at least $1500. Athletes with disabilities are also great role models, encouraging all Queenslanders to live a fit and healthy lifestyle,” she said. The foundation provides two levels of grants to Queensland based athletes with physical disabilities. Introductory level grants assist athletes to take up a sport and development grants are to assist established athletes with training and competition costs. Previously the largest number of grants in one year was 22, and the increased number of grants was enabled through fundraising events. Jonkers says that this year’s events, a Great Gatsby movie night at Maroochydore Birch Carol and Coyle and a 12-hour row, ride and run fitness challenge with Nambour Fatburners gym were a great success. “The fitness challenge called ‘12 hours to Rio’ was 3 teams of gym members who  competed against each other to raise the most money and cover the greatest distance for their teams, raising over $7000 for Sporting Dreams, which I am very grateful for as all this money goes to the athletes,” said Jonkers. Marayke is now seeking sponsors to assist with providing grants to athletes next year and is available for motivational speaking engagements in return for a donation to Sporting Dreams.   FAST FACTS   •     This  ceremony marks our sixth birthday •    Total number of grants: we have given  67 grants  over the past five years. Including this year’s recipients that is a total of 97 grants •     The total amount we have  given out is  $38,750 •     There are no age limits:  our youngest athletes was  6 and the oldest was 46! •     Four of our athletes have gone on to become Paralympians and compete at the London 2012 games. Many more have represented Australia. •    We launched a  virtual Hall of Fame in 2012 (www.sportingdreams.org)

Darron does his first half Ironman
Trying ‘Tri’ for Sporting Dreams